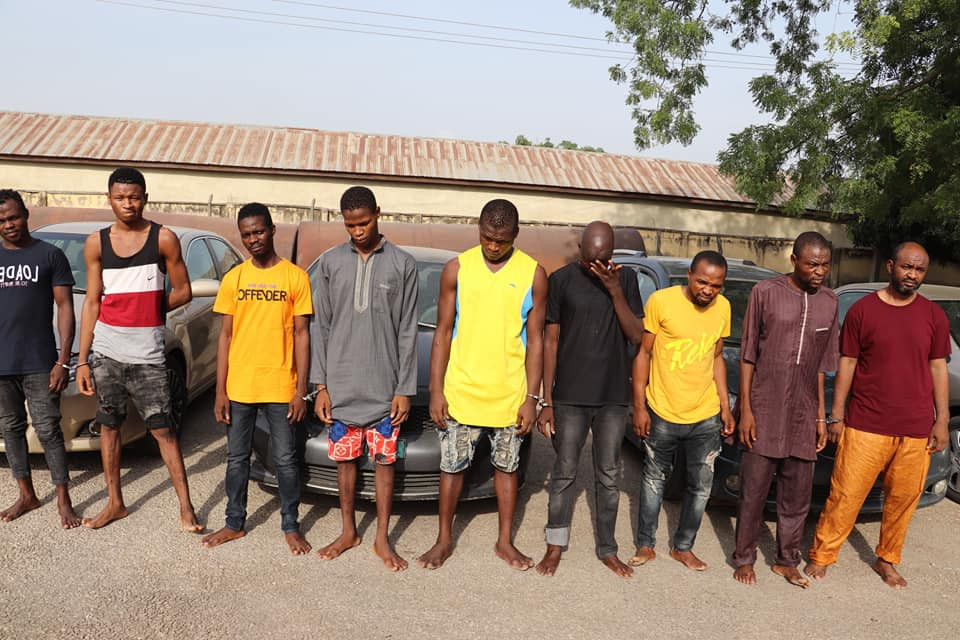 The Niger State Police Command has arrested nine notorious armed robbers and recovered vehicles, arms and ammunition.  Spokesperson of the command, DSP Wasiu Abiodun, who disclosed this in a statement on Tuesday, April 21, said the suspects were arrested at Bida Local Government Area, Farm Centre and Tunga area of Chanchaga LGA of the state.  “The Command recorded incidences of robbery attacks in the following areas; Bida on 14/03/2021, Farm Center Minna on 05/04/2021 and Niteco Tunga on 07/04/2021 in which people were robbed of their valuables and about six vehicles carted away,” he stated. Upon the receipt of these complaints, the Command swung into action and arrested nine suspects at different locations in Minna, Bida, Abuja, Sokoto State respectively and recovered six assorted vehicles. He gave the names of the suspects as Abdul Mohammed (a.k.a Audu Dukku) 25, of Anguwan Masa, Bosso Minna, Amos Oyerinde (a.k.a Babanla) 25, of Barkin-Sale, Minna, Yahaya Jibrin (a.k.a Chamo) 25, of Anguwan Masa Bosso Minna, Abubakar Sadiq Jibrin, 20, of Shororo road, Minna, and Mohammed Abdullahi, 37, of Suleja. Others are Chibuzor Bernard, 28, of Suleja, Mohammed Usman, 35, of Tunga-Maje, Zuba, Abdulrahman Ali (a.k.a Bala) 33, of Barkin-Sale, Minna and William Godwin, 33, of Tunga-Maje, Zuba.  The suspects who confessed to have actively participated in these robberies are; Abdul moh’d, Amos Oyerinde, Yahaya Jibrin and Abubakar Sadiq while Moh’d Abdullahi, Chibuzor Bernard, Moh’d Usman, and Abdulrahman Ali are receivers and transporters of the vehicles. William Godwin was arrested with a revolver pistol which was given to him by Mohammed Abdullahi and Mohammed Usman. He said during investigation, two Toyota Corolla vehicles, one Toyota Camry, one Pontiac Vibe, one Toyota Venza vehicle, one locally made revolver pistol, one live ammunition of AK47 rifle, and two empty shell of AK47 rifle ammunition, were recovered from the suspects. The statement said the case is under investigation and the suspects will be arraigned in court as soon as court resumes work. The post 9 notorious armed robbers arrested in Niger state appeared first on Linda Ikeji Blog.