Nigeria’s Tobi Amusan narrowly missed out of on a podium position (4th) as Puerto Rico’s Jasmine Camacho-Quinn claimed the women’s 100-metre hurdles gold on Monday, blitzing the field despite hitting one hurdle to finish in 12.37 seconds at Tokyo’s spectator-free Olympic Stadium.

Camacho-Quinn exploded off the blocks and strode shoulder-to-shoulder with Harrison, accelerating through the finish to win her first-ever Olympic medal and Puerto Rico’s first of the Tokyo Games.

Harrison and Tapper faced an agonizing wait as officials analysed their photo finish, with the bronze medal-winner looking up at the screen and saying “pray Jamaica,” as she awaited the results.

The victory capped a dazzling performance in Tokyo for Camacho-Quinn, who broke the Olympic record in her semifinal a day earlier.

She told reporters she nearly fell during the final, five years after she crashed out of her semifinal in Rio de Janeiro.

“I was really running for the record, I hit the hurdle – but everything happens for a reason,” she said. “I crossed the line like, ‘wait – I just won!’” 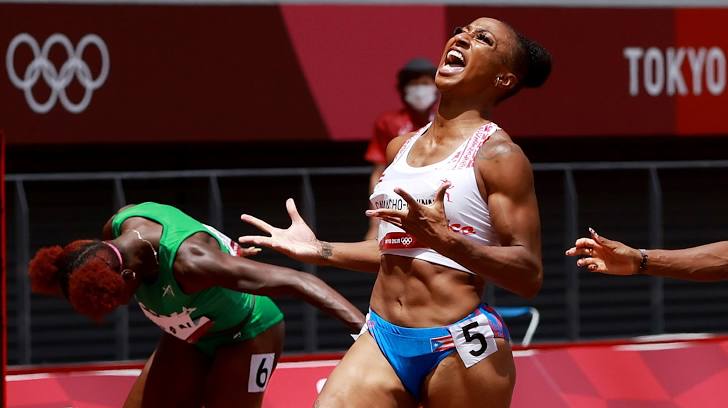 It was the first Olympic gold medal in athletics for Puerto Rico and Camacho-Quinn said she hoped her achievement could inspire children on the Caribbean island.

The race was the last of the morning programme at the stadium, where competitors were once again greeted by Tokyo’s blistering heat.

The athletics competition will resume later on Monday.

Johor MP wants Malaysians working in Singapore to get Pfizer Covid-19 jabs instead of...

Pakistan’s PIA to restart commercial flights to Kabul from Monday