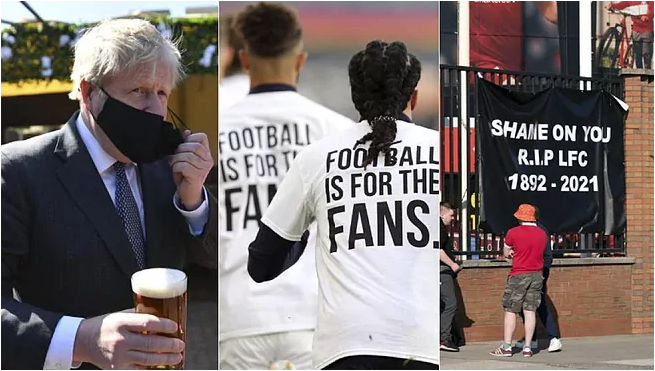 In a whirlwind couple of days for European football, it has now emerged that two of the English clubs involved in founding the European Super League are having second thoughts.

Manchester City and Chelsea are reported to be considering their options after seeing the backlash from their own fans.

British newspaper the Times reported that one of the English founding members was having doubts, while the Guardian named City and Chelsea as being both tempted to withdraw from the plans for a breakaway league.

The European Super League has generally received a very negative response in English football, with Liverpool fans protesting against their club’s involvement outside Anfield and Leeds United’s players warming up for their match against Liverpool in t-shirts emblazoned with the words “earn it” and “football is for the fans”.

Liverpool manager Jurgen Klopp, meanwhile, praised the Champions League and the fact that unexpected teams can qualify on sporting merits, which would not be the case with the European Super League.

Even Boris Johnson, the prime minister of the United Kingdom, has positioned himself against the Super League, threatening to intervene if necessary.

Even Boris Johnson, the prime minister of the United Kingdom, has positioned himself against the Super League, threatening to intervene if necessary.

Johnson ruling nothing out to avoid Super League

“We are going to look at everything that we can do with the football authorities to make sure that this doesn’t go ahead in the way that it’s currently being proposed,” Johnson said.

“We should drop a legislative bomb to stop it – and we should do it now,” Johnson is also quoted as saying.

A government spokesperson said Johnson “was clear that no action is off the table and the government is exploring every possibility, including legislative options, to ensure these proposals are stopped”.

With widespread political and popular opposition, not to mention the thought of legal battles with UEFA, FIFA and national federations, it’s no wonder that some clubs may be getting cold feet.

Nigerians are Calling on the Government to see to the cases of Banditry, Kidnapping,...