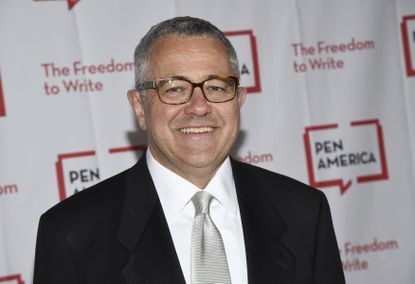 Media giants, CNN welcomed back news anchor Jeffrey Toobin after a 7-month hiatus that began when the CNN legal analyst was caught masturbating during a Zoom meeting with his colleagues at the New Yorker magazine.“Hi Jeffrey,” CNN anchor Alisyn Camerota said Thursday to her sheepish guest. “It’s been a while.” Toobin greeted her in return then Camerota immediately suggested the pair talk about the situation and Camerota did “the honors” with Toobin’s approval.Camerota asked “What the hell were you thinking?”To which he replied “wasn’t thinking very well or very much, and it was something that was inexplicable to me.” Toobin then went on to explain that his actions were indefensible, but what he could say for himself, is that he didn’t think his computer’s camera was on and didn’t intend to subject his colleagues to what they saw.“This was deeply moronic and indefensible,” he confessed.Toobin described the period since that incident as “miserable months” in his life and said that he is trying to “be a better person” through therapy, volunteer work and writing.“I am trying to become the kind of person that people can trust again,” he said.Watch the video below  #BREAKING: Jeffrey Toobin RETURNS to CNN and will continue as their chief legal analyst despite having masturbated on a Zoom call. Speaking to Alisyn Camerota, he explains that he “wasn’t thinking very well or very much, and it was something that was inexplicable to me.” pic.twitter.com/898T7lbebH— Curtis Houck (@CurtisHouck) June 10, 2021The post CNN anchor Jeffrey Toobin makes awkward return to CNN 7 months after he was caught masturbating in live zoom call (Video) appeared first on Linda Ikeji Blog.