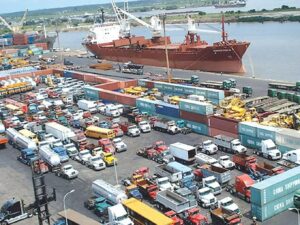 Some fees and charges collected by shipping companies and terminal operators from Nigerian shippers have pitched them against the nation’s Port Economic Regulator, PER, the Nigerian Shippers’ Council, NSC, for over a decade now. But the importers and exporters are still subjected to the huge cost arising from the charges while Nigerian economy suffers.

SLAC is an extra charge slammed on shippers after it was already included in the shipping charges paid by the shipper at the point of import.

The CCC is slammed on all containers even when such containers do not carry items that will need cleaning after content discharge.

However, in practical terms, the return is made difficult by the inaccessibility of the ports and the shippers are made to incur demurrages for delayed returns and end up losing the CDC refund. If the shipper returns the container late, he or she loses part of the deposit.

As a result of the bad situation of the port access roads which generates traffic gridlock, trucks returning containers spend several weeks on the road while the terminal operators are accused of rejecting or causing obstruction for those intending to return their containers to ensure that they lose their deposit.

However, an official of one of the terminal operators told Vanguard Business Magazine that the shipping lines decided to impose CDC because importers and their agents default in returning their containers after use.

Between 2006 and 2020, the accumulated illegal charges collected by terminal operators and shipping companies is estimated at over N4 trillion, as contained in the advert by the NSC.

Following series of complaints by stakeholders in the Maritime industry, the NSC waded into the matter and directed that both shipping lines and terminal operators stop further collection as well as return to the shippers all monies already collected.

Speaking during a meeting with Customs Licensed Clearing Agents and Maritime Truck Owners in Lagos, Executive Secretary of the Council, Hassan Bello, had said then that his organisation remains committed to protecting the interests of users of shipping services in Nigeria.

Bello also disclosed that the Council is working closely with the National Insurance Commission, NAICOM to stop further payment of CDC.

He said that both parties have been meeting to strategise on the best measures to curb the huge costs associated with the charges, adding that with the difficulty the importers, agents, and truckers go through to return their empty containers, it is not right to charge them for the delays which is not their fault.

Bello stated: “People should return containers as and when due but to be honest, the contract is frustrated because there is no access for returning these containers and you are going to charge importers and their agents demurrage, which is not fair.

“It is because of this rush to escape demurrage that you see a lot of trucks laden with empty containers that are meant for return, choking up the roads to the container terminals around the ports. That regime of empty containers has to be addressed holistically,” he noted.

It will be recalled that the NSC published an advertisement announcing the reversal of illegal storage charges at the ports to what was in force as at May 1, 2009.

The Council also ordered an extension on the free storage period at the port from three days to seven days, and equally directed shipping companies to reduce their shipping line agency charges from N26,500 to N23,850 per TEU and from N48,000 to N40,000 per TEU.

They also directed shipping agencies to refund container deposits to importers and agents within 10 working days after the return of the empty containers.

But not satisfied with the directive of the NSC, terminal operators under the auspices of Seaport Terminal Operators of Nigeria, STOAN and shipping agencies under the Association of Shipping Line Agencies, ASLA dragged the Council before the Federal High Court, challenging its powers to reduce their charges.

In a suit No. FHC/CS/1646/2014 – ALRAINE SHIPPING AGENCIES (NIG) LTD & ORS Vs NIGERIAN SHIPPERS’ COUNCIL and SUIT NO. FHC/CS/1704/2014 – APAPA BULK TERMINAL LTD & ORS Vs NIGERIAN SHIPPERS’ COUNCIL, the Federal High Court in Lagos, while affirming the position of the Nigerian Shippers’ Council, NSC as the Economic Regulators of the Ports, held that the Shipping Line Agency Charges, SLAC levied and collected from Nigerian shippers by the Shipping Companies since 2006, is illegal and that the shipping companies should account and pay to Nigerian shippers all monies or fees charged and collected since 2006 as SLAC.
Dissatisfied, the shipping companies and the Terminal Operators, mostly foreign-owned, filed suits to invalidate the actions of the NSC.

The Nigerian Shippers’ Council filed a Counter Affidavit to the suits and counter-claimed in relation to the Shipping companies case as follows:

1. A DECLARATION that by virtue of the provisions of Clause 2(a) and(b) of the Memorandum of Understanding between Providers and Users of Shipping/Port and Related Services dated 28th March 2001, the Plaintiffs do not have the powers or rights to unilaterally introduce and impose Shipping Lines Agency Charges, SLAC;

2. A DECLARATION that the unilateral introduction and imposition of the Shipping Lines Agency Charges, SLAC by the Plaintiffs and collection of same from shippers or users of shipping/port-related services from 2006 to date, is illegal, ultra vires, and therefore null and void;

3. AN ORDER directing the Plaintiffs to immediately stop the collection of the Shipping Lines Agency Charges, SLAC from users of shipping/port and related services; and

4. AN ORDER directing the Plaintiffs to account for and pay to the Defendant, with interests at the rate of 21% per annum, all monies or fees collected by the Plaintiffs as Shipping Lines Agency Charges, SLAC from shippers or users of shipping/port-related services from 2006 to date.

5. A Declaration that by virtue of Section 5 of the Constitution of Nigeria 1999; Section 4 of the Nigeria Shippers’ Council Act Cap. 133, Laws of the Federation of Nigeria 2004, Regulation 3 of the Nigerian Shippers’ Council (Local Shipping Charges on Imports and Exports) Regulations 1997 and the written directive from the Minister of Transport dated 20th February 2014, the Defendant can act as the economic regulator of Nigerian ports to issue directives, ensure fair competition; take lawful steps to make the ports user-friendly and attractive to business and regulate local shipping charges in Nigerian ports.

The private terminal operators at the nation’s seaports have carried out their threat of challenging the Appeal Court judgment that declared some of their charges illegal and a penalty of over one trillion naira slammed against them.

The concessionaires, under the umbrella of Seaport Terminal Operators of Nigeria, STOAN, have gone to the Supreme Court against the Nigerian Shippers’ Council and Shippers Association of Lagos State, SALS to vacate the rulings of the appellate court.

They are challenging the judgment of the Court of Appeal which on January 16, 2018, upheld the judgment of a Federal High Court sitting in Ikoyi, Lagos that declared the charges illegal and ordered the terminal operators to revert to the status quo on storage and port charges as at 2009.

The court case which lasted over a year had affirmed the judgment of the lower court saying that the submission of the terminal operators lacked merit even as it was termed to be a mere academic work.

Delivering the judgment, Justice Chidi Uwa, maintained that the appellant failed to establish its case.

A reliable source in Shippers’ Council confirmed that the concessionaires went to the apex court and that the Council is waiting for the summons.

A document dated February 26, 2018, sighted by our reporter in Lagos, also revealed that STOAN has also hired a new Senior Advocate of Nigeria, SAN, to boost the legal team that held sway at the lower courts.

Counsel to SALS, Osuala Nwagbara, while reacting to the development, said the terminal operators have eventually decided to drag NSC to the Supreme Court.

Responding to allegations of not showing concern in the face of series of unauthorised levies imposed on shippers by terminal operators and ship owners, Bello explained that the justice system in the country works slowly but expressed confidence that it will lead to justice for the shippers.

Bello had earlier said that importers are annually subjected to payment of N1.7 billion as container deposit fees to foreign shipping companies.

He said that the Council will work at stopping the payment of container deposits before the end of the second quarter of this year.

According to the NSC boss, “every shipper pays N120,000 as container deposit fee to foreign shipping companies, with the estimated total amounting to N1.7 billion every year for container deposit only. This is adding to the cost of doing business in our ports and is not the fault of the shippers, but because he cannot return the container within the specified time due to the fact that the roads are clogged up, and the holding bays are not working; so why must the shipper bear such cost?

“We want indemnity system and we have already spoken with National Insurance Commission, NAICOM to bring insurance penetration into our port system. Hopefully, by the first quarter of next year, there will not be payment of container deposit again.”

However, from the container throughput figures provided by NPA, importers paid N1.921 billion container deposit in the first quarter. This amount is gotten from 192,164 TEUs multiplied by N100,000 paid by importers for the period.

For 2017 and 2018, the amount paid by the importers as container deposit stood at N66.8 and N80.9 billion respectively, according to the NSC.

Speaking on the issue, President of the National Council of Managing Directors of Licensed Customs Agents, NCMDLCA, Lucky Amiwero, blamed the NSC for the delay after getting a favourable judgment at both the Federal High Court and the Court of Appeal.

Amewiro explained that the Shippers’ Council should have executed that judgment by ensuring that both the shipping lines and the terminal operators comply with it.

He noted that the Council has approached the court to seek the power to collect the illegal funds from the shipping lines and the terminal operators, it should go ahead to enforce the refund and warehouse it in a dedicated account until the Supreme Court decides the final position.

The NCMDLCA boss pointed out that it is only in Nigeria that these kinds of charges are slammed on shippers, adding that even in neighbouring countries like Ghana, Benin, Togo and others around the world, most of these charges are unheard of.

He called on the Federal Government to step in and correct the huge anomaly stressing that it is Nigerians that bear the brunt of these illegal charges.

However, a top member of the Association of Nigerian Licensed Customs Agents, ANLCA, who refused to be mentioned said that they are aware that an out-of-court settlement is being worked out but insisted that details cannot be revealed yet.

The source, however, warned our reporter to be careful, noting that though “these people” have not started harming journalists does not mean that they cannot.

2023: I ‘ll become president if… – Orji reacts to Arogun’s prophecy