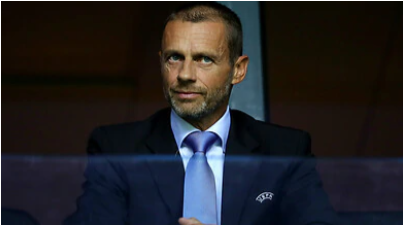 European Super League (ESL) is a “disgraceful, self-serving” plan and a “spit in the face of football lovers”, says Uefa president Aleksander Ceferin.

He also said players who play for teams involved in the closed league would be “banned from the World Cup and Euros”.

Arsenal, Chelsea, Liverpool, Manchester City, Manchester United and Tottenham are among 12 clubs who have agreed to join the proposed ESL.

Dowden said the review had been brought forward and would offer a “root and branch” review of the sport, covering finance, governance and regulation.

He said while football’s authorities are equipped to handle the proposed ESL breakaway, the UK government would provide “full backing”.

“Be in no doubt, if they can’t act, we will,” added Dowden. “We will put everything on the table to prevent this from happening. We are examining every option. Put simply, we will be reviewing everything the government does to support these clubs.”

Labour welcomed Dowden’s statement but said it was “short on detail and the urgency this situation merits”.

A YouGov poll of 1,730 football fans found 79% opposed the idea of a European Super League, with 68% of those polled stating they are strongly opposed to the move.

Ceferin, who has been Uefa president since 2016, has overseen an agreement on a new-look 36-team Champions League but made clear his disdain for the ESL project.

“We are all united against this nonsense of a project,” he said.

“I cannot stress more strongly how everyone is united against these disgraceful, self-serving proposals, fuelled by greed above all else.

“[It is a] cynical plan, completely against what football should be. We cannot and will not allow that to change.

“Players who will play in the teams that might play in the closed league will be banned from the World Cup and Euros. We urge everyone to stand tall with us as we do everything in our power to ensure this never ends up in fruition.

“This idea is a spit in the face of all football lovers. We will not allow them to take it away from us.”

The post European Super League a ‘spit in the face of all football lovers’, says Uefa president appeared first on Sporting Life.