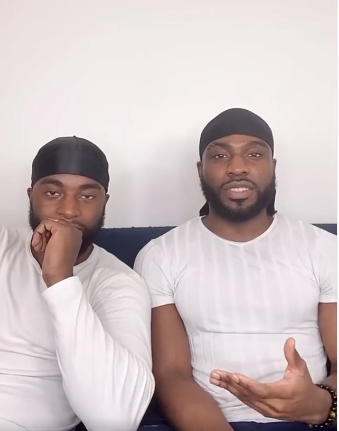 Former presidential spokesperson, Doyin Okupe’s son Bolu and his gay partner Mfaome have revealed how they met.  The couple who agreed there’s no way to know if someone is the right one, revealed that they met on Tinder and started dating in February 2021. They said that they decided to go public with their relationship to encourage other gay men not to hide theirs.  According to him, no one tells straight people to hide their relationship. Doyin’s son said he asked Mfaome out first and also disclosed that they are same age. He further revealed that Mfaome makes him a better person and also compliments him. Watch the video below;       View this post on Instagram           A post shared by Lindaikejiblog (@lindaikejiblogofficial)The post Former presidential spokesperson, Doyin Okupes son Bolu and his gay partner Mfaome reveal how they met (video) appeared first on Linda Ikeji Blog.