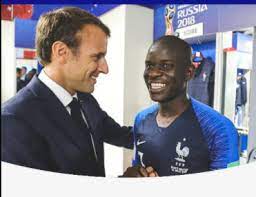 France president Emmanuel Macron is the latest voice to push for N’Golo Kante to win the Ballon d’Or this year.

Speaking to French radio RMC on Thursday from the team’s training facility in Clairefontaine where he paid a visit to the national team, Macron was full of praise for the Chelsea midfielder.

“N’Golo Kante is a great player, like Kylian Mbappe and he is an example. He is an example for the youth of the country. When we see again the season Kante has had with his club, and I hope the Ballon d’Or too and I’m sure what he will do in this Euros,” Macron said on the show “Top of the foot.”

“He and Kylian are good people too, with values of effort and togetherness. They are loyal to the clubs where they come from. And I think it is very important for the country because sport is always bigger than just sport.”

Kante, 30, has been outstanding in 2021 and is one of the main contenders to win the prestigious award which is given over a calendar year, not a season.

On his visit, Macron spent time with Les Bleus and their head coach Didier Deschamps, just as he did before the 2018 World Cup. He told them, like he did three years ago, to bring the trophy back home, to never give up and be a team for the entire country.

Nigerians berate official at Nigerian embassy in Atlanta for his conduct when they arrived...