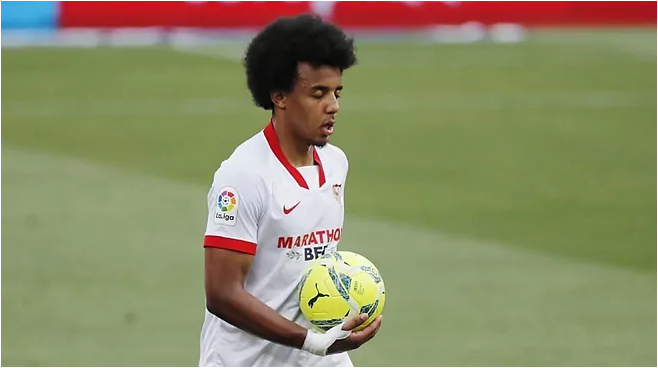 Jules Kounde has admitted that he could leave Sevilla this summer after another successful season for the young French star.

The 22-year-old spoke at the French national side’s camp in Clairefontaine about how he sees himself potentially moving on to pastures new.

“Regarding my future, it is certain that I will perhaps have to change clubs this summer, but nothing has been finalised yet. I have not decided anything,” Kounde said.

“My goal is to play at a big club to try to always progress and to win trophies. I might have to move, but that’s not relevant today.”

Kounde has been heavily linked with moves to Real Madrid, Manchester United, Arsenal and Chelsea in recent months after two impressive campaigns at Sevilla, while Manchester City had a bid rejected last summer.

He’s excelled at Sevilla since his move from Bordeaux in 2019 and has emerged as one of the most promising young defenders in European football.

Jules Koundé has been linked with a move to Man United

Having helped the Andalusian side to their sixth Europa League trophy in his first season, putting in some sensational performances along the way, Kounde has continued that good form this campaign as Sevilla finished fourth in LaLiga Santander, securing Champions League football.

His recent comments will have drawn attention from potential suitors around Europe and his stock will likely be raised even more if he puts in some impressive displays at the European Championship with France this summer.