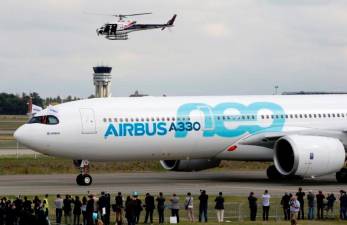 In the current challenging environment, almost all of the aircraft that are in the air are new and efficient aeroplanes such as the Airbus A380, A330 Neo and A320 Neo family.

“Airlines find these planes to be more cost efficient and sustainable, and better for their operations,” he said during the Airbus Malaysia Connect Webinar’s panel discussion on ‘Restarting Aviation in a Post Covid World’ today.

Anand said new orders for such aircraft will hinge on a recovery, which will occur in stages, starting from a resumption of intra-region travel, to regional travel to inter-pacific flights which will translate into demand for smaller single-aisle aircraft to wider longer haul aircraft.

“But right now our focus is not on orders but with helping our customers with a solution and for the industry to recover as soon as possible.”

Association of Asia Pacific Airlines director general Subhas Menon concurred, noting that there is a huge overhang of debt incurred by carriers since the start of the Covid-19 pandemic.

“I don’t think they will have the wherewithal to execute any major restructuring of their fleet; to place new orders and refleet will require a lot of investments, airlines will have a lot of debt to repay in the first couple of years,” he said.

Subhas also agreed that there is a shift towards more fuel-efficient and economical aircraft given the fact that the market has shrunk over the last 14 to 15 months.

“At the same time airlines are also keeping an eye on sustainability to reduce their carbon footprint. I think the future will be in that direction, more revenue optimising and climate friendly aircraft.”

Subhas said the air cargo segment is a silver lining in the current downturn as its performance has exceeded the pre-pandemic levels. However, it is not going to change the profitability picture of the industry.

Anand said the segment will continue to grow because of risk management and supply chain concerns due to the logistic disruption stemming from the Suez Canal blockage crisis which has raised awareness among supply chains.

All of the aircraft that are in the air are new and efficient aeroplanes, among them the A330 neo. – REUTERSPIX

I’m Not Poor And Homeless – Eboue

Learn, adapt and be receptive to feedback