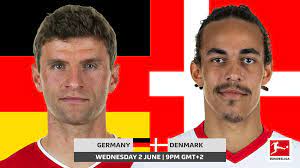 Mats Hummels says that Germany are eager to throw down a marker ahead of the looming Euro 2020 finals when they face Denmark in a warm-up friendly on Wednesday.

However, Germany had their confidence knocked by a humbling 2-1 defeat to minnows North Macedonia in March following a 6-0 thrashing away to Spain last November and both defeats drew fierce criticism.

After nearly three years out of the squad, Hummels, 32, admitted he had been “nervous” with excitement before joining Germany’s training camp in Austria and says the Germans are eager to impress against the Danes on Wednesday.

“It is very important that we approach these games the way we want to play at the European Championships,” Hummels said, with Germany also playing a friendly against Latvia next Monday.

The Dortmund centre-back was in the German national side which crashed at the 2018 World Cup finals in Russia after finishing last in their group.

Three years on, the Germans want impressive wins over the Danes and Latvians to take into the Euro 2020 finals from June 11-July 11.

“Before the 2018 World Cup, our performances in the friendly games weren’t that convincing. We know that,” Hummels admitted.

Goalkeeper Manuel Neuer will captain Germany on Wednesday against the Danes, whose coach Kasper Hjulmand says the Germans have the “potential” to be crowned European champions for the fourth time.

“They have brought some of the experienced players to this tournament,” Hjulmand told reporters, referring to Hummels and Thomas Mueller, who Loew has recalled despite axing the pair from his plans in 2019.

Denmark face Finland, Belgium and Russia in Euro 2020 Group B.

Nigerian soldier warms the heart of many after video of him proposing to ...

Orezi & Toke Makinwa discuss the Lifestyle of Musicians in this Episode of “Toke...