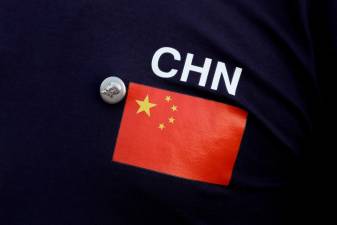 BEIJING: China’s GDP expanded by a dizzying 18.3% in the first three months of 2021 from a year earlier, sealing its status as COVID-19’s “first in, first out” economy.

It was the only major economy that showed an increase in gross domestic product (GDP) last year after successfully controlling the spread of the coronavirus pandemic at home.

But is the Chinese economy, the world’s second-biggest, out of the woods?

China’s first-quarter GDP expanded by 4.28 trillion yuan ($655 billion) from January-March last year. That’s roughly the size of Poland’s economic output in 2020, or two times the value of all the shares of French luxury goods giant LVMH in the stock market.

China’s $16 trillion economy has been powered by its vast industrial sector over the past year. Its factories have raced to fill overseas orders for goods ranging from protective masks to work-from-home electronics, with rival manufacturers abroad paralysed by COVID-19.

This year, Chinese consumers are finally opening up their wallets after months of hesitation. Retail sales jumped 34.2% in March from a year earlier. More significantly, they were 12.9% higher than March 2019 – before the pandemic.

But Beijing has been cautious about declaring a complete recovery, saying the foundations of a recovery are still not firm.

Signs of a slowdown have already emerged. On a quarter-on-quarter basis, GDP growth slowed to 0.6% in January-March compared with a revised 3.2% increase in the October-December quarter. It also missed economists’ expectations for a 1.5% expansion.

The U.S. economy, despite contracting the most since 1946 last year, is still the world’s largest at about $21 trillion, when not adjusted for inflation.

But China’s importance to the overall health of the global economy is underscored in a number of areas.

It buys more cars than any other country, and is also the No.1 market for electric vehicles. For many global retailers, both high street and luxury, China is their main driver of sales, especially with most overseas markets still struggling with the novel coronavirus while China is largely COVID-19 free. It is also a leading box office market globally that has saved Hollywood flops like “Warcraft” (2016) from ruin.

A report by British think tank, the Centre for Economics and Business Research, forecast China will overtake the United States to become the world’s biggest economy by 2028 – five years earlier than previously estimated.

WHAT ARE THE EMERGING TRENDS IN CHINA’S RECOVERY?

China’s eye-popping first-quarter growth, distorted by the low statistical base a year earlier, is likely to return to a more normal pace later this year. The Chinese government has set an annual GDP growth target of at least 6% for 2021.

Its stellar export growth may also soften in the coming months as global vaccination picks up pace and other countries restart their economies, potentially hitting Chinese industries.

Chinese factories are already struggling with surging raw material prices and grappling with a shortage of semiconductor chips needed in the manufacture of products from computers to household appliances, owing to pandemic-related disruptions. – Reuters

Man who rammed into cop in Penang remanded for seven days

Former Australian Rugby player of the year, Jarryd Hayne jailed for 5 years for...