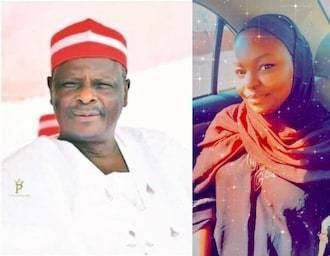 A Kano woman identified as Lubna Ali, has claimed that she has turned down a marriage proposal because of insult on former governor, Senator Rabiu Musa Kwankwaso.  In an interview with Sahelian Times on Tuesday, April 13, the woman said she would rather remain single for life than marry a person who disrespects her political hero, Kwankwaso.  “I ended a marriage proposal for his Excellency, Dr. Rabiu Musa Kwankwaso, despite that he doesn’t even know me in person. But he is someone I can take a bullet for. Kwankwaso is more than a politician. I see him as a leader, a father and a mentor.”“I turned down a marriage proposal due to a disrespectful act against my mentor, Senator Rabiu Musa Kwankwaso.” she said.  Speaking further, Lubna said she started liking Kwankwaso’s political ideology when she was in JSS 1 in 2003.”Then I didn’t even know what politics is all about, but the name Kwankwaso kept ringing in my head. I remember that my first car was a red 406 with his sticker all over,” she said.  The post I can take a bullet for Kwankwaso – Kano woman claims she turned down marriage proposal over insult on Senator Kwankwaso appeared first on Linda Ikeji Blog.

The herdsmen, tribesmen and statesmen: Discordant cord of three strands

Two retailers accuse Usher of shoplifting, with one claiming the singer...