MELODYINTER
Home News Africa News I want to get married to the love of my life –...
Facebook
Twitter
WhatsApp
Linkedin
Telegram

Kenyan first-ever openly lesbian rapper, Gammo Suspect has penned an open letter to President Uhuru Kenyatta to seek his permission to marry the love of her life.  The controversial rapper, who is one of the most vocal and lyrical activists for Lesbian, Gay, Bisexual, and Transgender (LGBT) right in Kenya, got engaged to her woman, Margaret in April 2016 three years after they met.

While they are celebrating their 8 years anniversary, Gammo has penned an open letter to President Uhuru Kenyatta, in which she stated that she wants to get married to her partner and also needs a ‘legit marriage certificate.’ She wrote: #LETTER_TO_THE_PRESIDENT I WANT TO GET MARRIED TO THE LOVE OF MY LIFE. AND I NEED A LEGIT MARRIAGE CERTIFICATE. Dear Mr President My name is Grace Wambui Munene. And my stage title is Grammo Suspect- Rainbow Ambassador Kenya, Aka Mtetezi wa RAIA,ukipenda ,citizens defender. Most people ask what my long stage name stand for ,hence am going to elaborate. Grammo is a combination of my two names,that is ,Grace and Munene, Gra from Grace and Mmo from Munene – Grammo Suspect is what people see when they look at me While Mtetezi wa Raia,(citizen defender)is what i see ,when I look in the mirror. Rainbow Ambassador Kenya, is more of a responsibility than a title. The rainbow flag is widely used by lgbtqia+ movement ,and I swore and pledged to fight for the rights of my community, hence Rainbow Ambassador Kenya. I am a lyrical and pictorial activist. “Lyrical” – I use my talent,to fight for human rights. And I specialize in rap and spoken word poetry. Whereby, I write,record and perform. “Pictorial” – My partner and I,take pictures together, and then post them. To try and show others who are like us, that they are not alone, cause in this world of hate,it is scaring to be a part of the LGBTQIA+ community. THERE IS A GIRL She took my breath away on 11th,Nov 2012, hence, I have been following her ever since, I can’t live without air. The closer I got, the more she took. And now, she has my heart,my mind, my body and my soul. Allow me to brag for I got charms too. She has willingly given me, all that is hers. She has walked and crawled with me. And have literally ran with me uncountable times, when our grounds have been lit with blazing fire. Today,marks the 8th year ,since I laid my eyes on her, and all I wanna do is marry her. She is my first lady. Yes, my “Margaret.” Some people are of the opinion that,a marriage certificate is just a paper but I beg to differ. It is that paper that will protect my family when am gone. I know some ignorant fools think that family and gay are not words that should go together,but that does not hinder us from accomplishing our dreams. 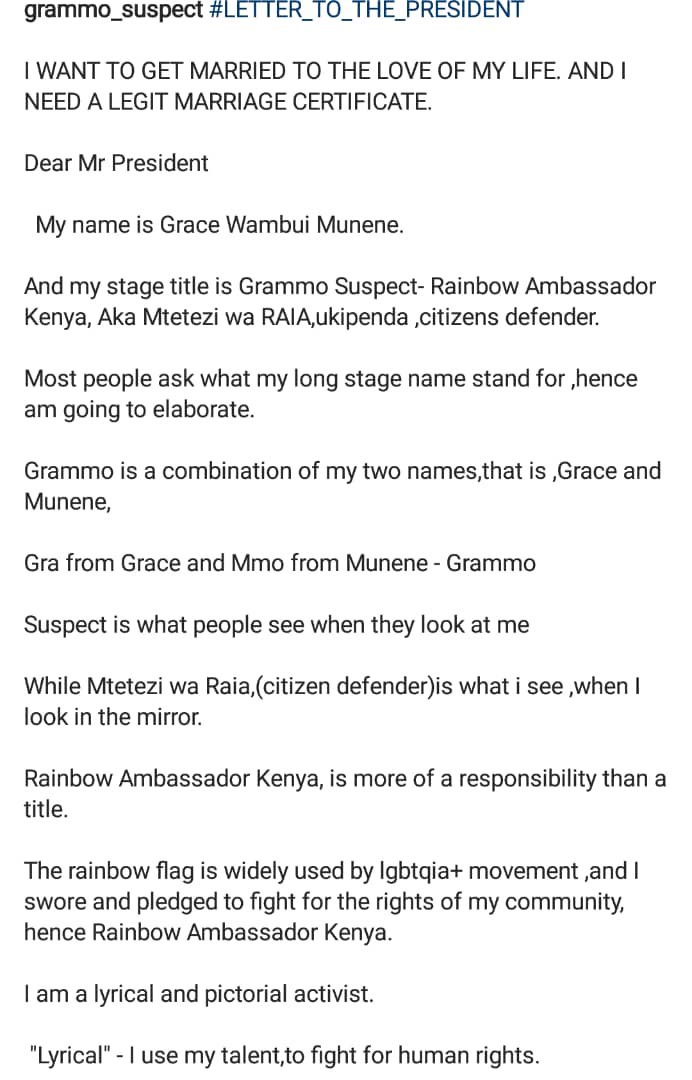 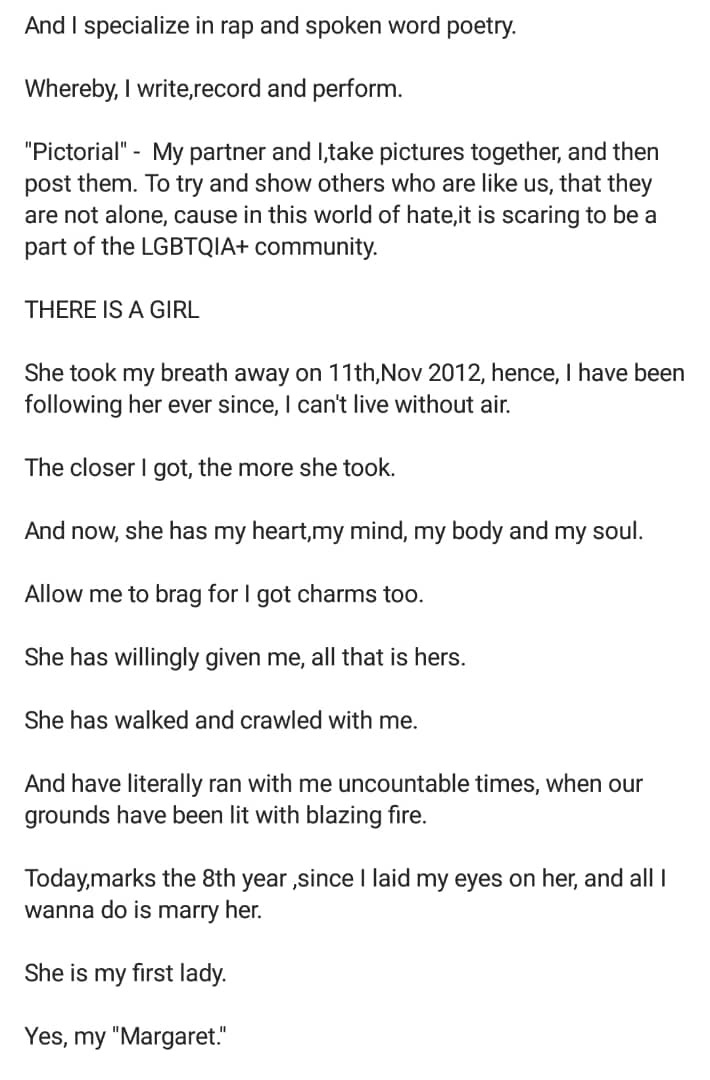 The post I want to get married to the love of my life – Kenyan first-ever openly lesbian rapper, Gammo Suspect, pens open letter to President Kenyatta for permission appeared first on Linda Ikeji Blog.

What I say’ll happen in Rivers – Amaechi

“Awards actually don’t mean anything to me anymore” – Vector Unbothered...