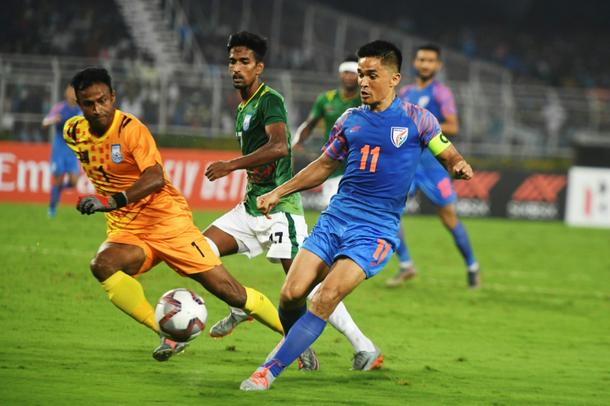 Indian football star Sunil Chhetri has surpassed Lionel Messi in international goals, after scoring both goals in his country’s 2-0 win over Bangladesh in Doha.

Chhetri moved past Argentine Messi’s 72 goals when he opened the scoring in the 79th minute on Monday, in a qualifying match for the 2022 FIFA World Cup and 2023 AFC Asian Cup.

The 36-year-old striker added a second in injury time, taking his total to 74 goals for India, who are already out of the race to qualify for the World Cup but can make it to the Asian Cup in China.

With 73 strikes, Ali Mabkhout of the United Arab Emirates is also above Messi – a six-time Ballon d’Or winner widely regarded as the greatest player of the modern era.

All India Football Federation (AIFF) president Praful Patel lauded the captain for leading from the front.

“Our @IndianFootball skipper Sunil Chhetri adds another feather to his illustrious cap as he overtook Lionel Messi to become the second-highest active international goalscorer with 74 goals,” Patel wrote on Twitter.

“A big congratulations to Captain Fantastic & wishing him many more accolades in the future.”

India will next face Afghanistan in the qualifiers, on June 15.

GetInsta: The Best Tool To Get Free Instagram Followers Or Likes