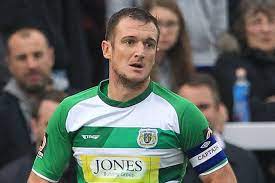 An inquest has been open into the death of Yeovil Town captain Lee Collins.

Collins was found dead in his hotel room, the inquest has heard.

He was discovered at the Lanes Hotel in West Coker, near Yeovil, on March 31.

The probe  into the 32-year-old’s death was opened and adjourned by Tony Williams, the senior coroner for Somerset, during a hearing in Taunton.

In a statement read to the court, coroner’s officer Ben Batley said Mr Collins, from Newport, Gwent, was confirmed dead at the hotel on March 31.

“The coroner resolved that it will be necessary for further statements and reports to be obtained in respect of the circumstances of Lee’s death and the inquest was adjourned to an internal case management review on or before July 2021,” Mr Batley said.

The defender began his career at Wolves and also had spells with Hereford, Port Vale, Barnsley, Shrewsbury, Northampton, Mansfield and Forest Green.

He moved to Vanarama National League club Yeovil Town from Forest Green in 2019 and made 35 league appearances for the Somerset club, including eight this campaign.

His most recent outing came in a 1-0 defeat at Stockport on February 6.