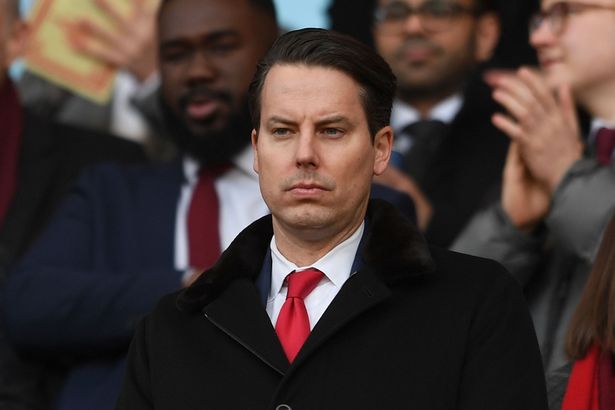 Josh Kroenke has revealed that his family company will pay the fine incurred for Arsenal’s withdrawal from the European Super League rather than the club itself.

The Gunners were one of the six English teams who had originally signed up to the controversial new tournament, but they faced a furious backlash from both their own supporters and pundits and players around the world.

And as a result they, along with Manchester United, Manchester City, Liverpool, Chelsea and Tottenham, announced on Tuesday they would be performing a huge u-turn and walking away from the scheme.

Kroenke, whose father Stan is the CEO of the KSE company which owns Arsenal, attended a fans forum to discuss the fallout from the Super League farce on Thursday.

He faced a number of questions, one of which was over who would pay the fine which Super League chairman Florentino Perez stated would be necessary in order to exit proceedings.

And he replied: “To confirm, KSE are covering all outside costs related to the ESL.”

It is not clear exactly how much this is, but CEO Vinai Venkatesham added: “This is nowhere near the £8m mentioned.”

That did not seem to placate the Arsenal supporters present, however, and one asked whether the Kroenke’s would be looking to sell the club in the near future.

But Josh replied: “We believe we are fit to go forward with Arsenal, and that we were put in a difficult situation by sources outside the Club.

“Leadership is about recognising when you are wrong, correcting and apologising. It was never our intention to harm English football, we can talk Financial Fair Play, about racism, but for football pyramid stability we need to ensure we are maximising revenue. But we went about it the wrong way on this occasion.”

Protests are expected against the Kroenkes before Arsenal’s game against Everton on Friday, and it seems the Americans are fighting a losing battle in a bid to try to win back over fans of the club.

NigerianRapper Zumzy dies after posting “Had too much potential. Good night...