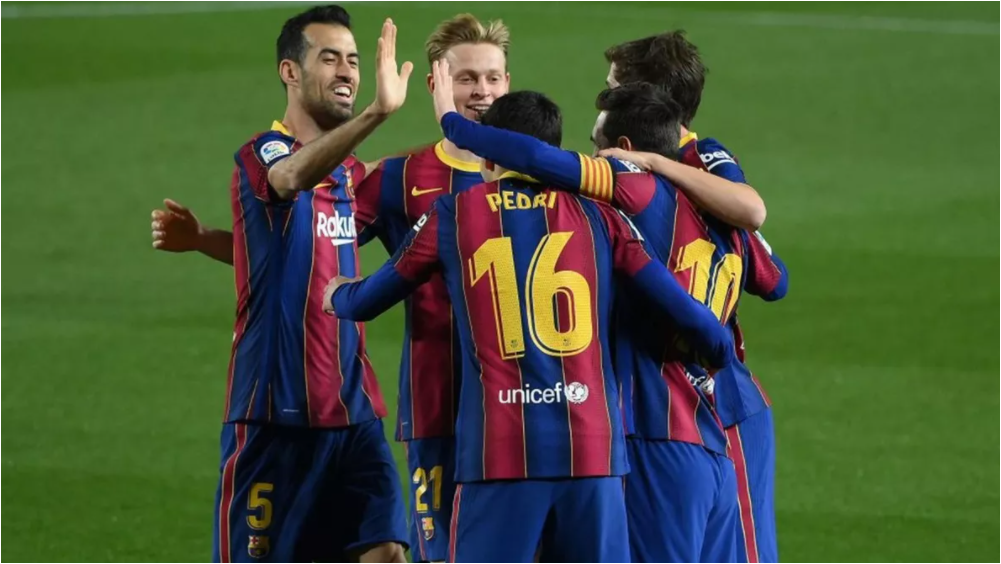 Lionel Messi bagged a brace as FC Barcelona kept their LaLiga title hopes alive with a 5-2 victory over Getafe on Thursday evening.

Ronald Koeman made just one change from the Copa del Rey triumph last weekend, with Sergi Roberto coming on for Sergino Dest at right back.

The hosts got off the to the perfect start when Messi collected a pass from Sergio Busquets, rolled off one challenge before firing into the far corner in the eighth minute.

Getafe weren’t behind for too long after they were gifted the equaliser four minutes later when Clement Lenglet deflected the ball into this own net after Angel Rodriguez’s cross.

There was another own on goal on 28 minutes but in favour of Barcelona as a mix-up in the Getafe defence ended with Chakla passing the ball into his own net with goalkeeper David Soria not on his line. It was also the side’s third own goal of the campaign.

Barcelona extended their lead five minutes later when Pedri headed the ball into the path of Messi, who struck the upright before slotting home from the rebound.

Getafe saw a lot more of the ball after the restart but chances were hard to come by until the 69th minute when they awarded a penalty for Ronald Araujo’s foul Enes Unal, who stepped up to convert the spot-kick.

Koeman responded with a change in the 75th minute as Oscar Mingueza made way for Samuel Umtiti in the defence as the visitors looked bag an equaliser.

Araujo made up for his earlier error after wrapping up the win for Barcelona in the 87th minute after rising above his marker to head home Messi’s corner.

There was enough time for Antoine Griezmann to get his name on the scoresheet after converting a spot-kick after he was brought down in the box, as Barcelona now sit five points behind Atletico Madrid who defeated Huesca 2-0 on Thursday evening.

‘The Shirt Is Iconic’- Aribo Thrilled To Wear Super Eagles’ ...