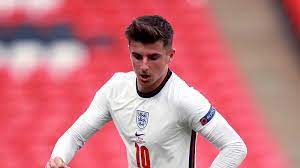 All eyes will be on Wembley this Sunday as Gareth Southgate’s men kick off Euro 2020 Group D against the side that broke English hearts in the World Cup semi-finals three years ago.

Modric ran the show as Croatia came back to secure that 2-1 extra-time win and the Three Lions will be looking to exact revenge under the arch, where Mount is hoping to get the better of the veteran once more.

“He has always been a player that I have looked up to,” Mount said. “Ever since he has been in the Premier League with Tottenham, I have watched him quite closely.

“Playing against him, it was weird because I had watched him so much, I kind of knew his moves and what he was going to do.

“It helps being a fan of a player and then playing against him because you know what he likes to do.

“The experience of playing against him helps because you want to be in these big games and learn how to handle the pressure and big moments.

Mount did not only play against Modric but took home his shirt, with the 2018 Ballon d’Or winner then requesting his jersey at Stamford Bridge.

“It was brilliant for me obviously to speak to him and he wants my shirt so I was quite overwhelmed, yeah.”

Asked what it felt like knowing Modric wanted his shirt, he smiled and said: “Special. I’ve got it at home along with a couple of others I’ve got over the last couple of months or so. It’s always good to keep those special shirts.”

It Was De Bruyne’s Choice To Leave Chelsea -Mourinho

“A Superstar Made in Lagos”: Banky W, Uche Pedro describe Wizkid as he Celebrates...

Work or School: Balance Portability and Productivity with the Infiix INBook

AC Milan to make Kjaer Captain after helping to Save Eriksen