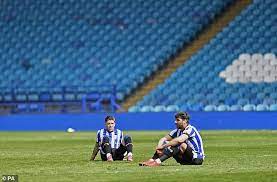 Sheffield Wednesday are among clubs to have asked for clarification over whether players could be put on furlough, according to reports.

The Owls were relegated after finishing bottom of Championship table, having drawn 3-3 with Derby on the final day of the season.

The PA news agency understands the issue of whether clubs could make use of the Government’s coronavirus job retention scheme was raised at an EFL meeting.

Any club requesting further clarification was directed to the latest information from HMRC, which was updated on March 3, with the furlough scheme having been extended until the end of September.

According to a report in the Daily Telegraph, Sheffield Wednesday players, who already faced payment delays, have rejected proposals from the club for some of the squad to be placed on furlough.

When contacted by PA on Saturday morning, Wednesday did not comment on whether they had been one of the clubs looking to make use of the scheme.

Part of growing up is being able to tell your friends the ugliest truth...