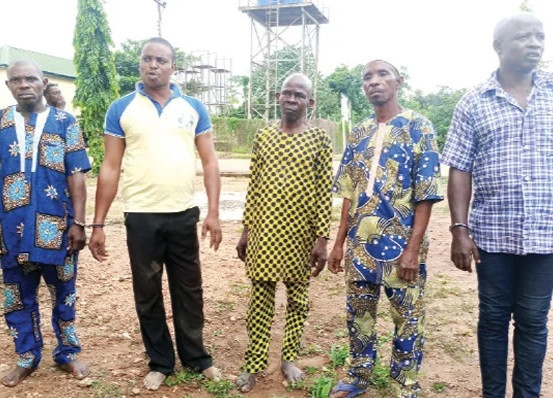 A pastor, a herbalist, and three other men were paraded on Wednesday, June 9, for allegedly being in possession of human body parts. Olagunju Adetunji, a 40-year-old pastor in Kajola, near Osogbo, Osun State, was allegedly caught with human hands and legs. Also paraded was a 50-year-old herbalist, identified as Adewumi Gbadamosi, alongside three others named Rasheed Ajani, Saka Akeem, and Abiodun Adetimilehin. They were arrested for allegedly killing a teenager simply identified as Kehinde near a hospital in Osogbo. The herbalist allegedly confessed to the crime and said the teenager’s head was given to the pastor and accomplice, Saka Akeem, after they approached him for help over poor patronage in church. The state Commissioner of Police, Wale Olokode, said acting on intelligence, operatives arrested the suspects at Oke Ayepe area of Osogbo and Kajola ljesha. Olokede said: “The suspects were arrested with two decaying hands and two legs of one Kehinde, whose surname and address are still unknown. The principal suspect, one Adewumi Gbadamosi, confessed to the crime and said the victim’s head was given to one Olagunju Adetunji for rituals.” “While being paraded, Gbadamosi said he shot Kehinde dead while on night guard duty post in Osogbo. He then dismembered him, took some parts and threw the rest of the body into a river.’ “The herbalist said Ajani, who was also working as a night guard, assisted him to carry the deceased after he had killed him.” he added Pastor, Adetunji, denied receiving the deceased’s head from the herbalist, but admitted meeting Gbadamosi once in his church after his friend, Adetimilehin, brought him for spiritual help. Olokode said the suspects would be arraigned before a court after investigation had been completed.The post Pastor, herbalist and three others arrested with human parts in Osun state appeared first on Linda Ikeji Blog.

“If I decide to take everything today, nothing de happen”- Jude Ighalo’s wife, Sonia, replies trolls who say she is pained for calling him...

Law minister: Emergency is Agong’s prerogative, nobody should speculate about whether it will be...

Teenager charged with murder after allegedly killing man who tried to...