Premier League: Why Aubameyang was sent off 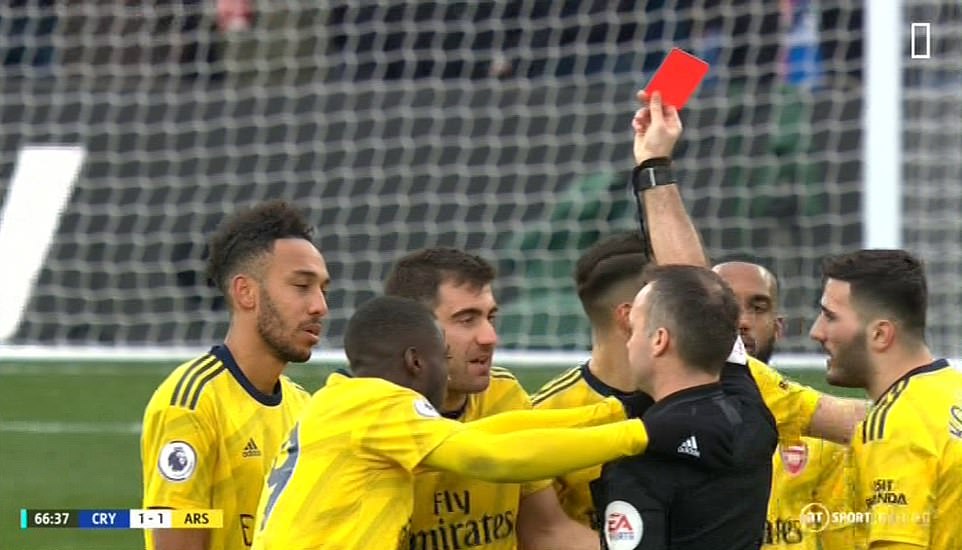 Premier League have released a statement to clear up any confusion surrounding Pierre-Emerick Aubameyang’s red card.

Off you go VAR over rules referee

The striker was sent off after a lengthy VAR review during Arsenal’s 1-1 draw with Crystal Palace at Selhurst Park.

Aubameyang was initially awarded a yellow card after he lunged into a late tackle on Eagles midfielder Max Meyer.

But the Gabon international was given his marching orders after VAR overturned the decision after watching the incident back.

A statement from the Premier League read: “In the 65th minute of Crystal Palace vs Arsenal, Pierre-Emerick Aubameyang was shown a yellow card for a challenge on Max Meyer by referee Paul Tierney.

“The VAR looked at the incident and determined that the point of conduct and the intensity of the challenge endangered the safety of the opponent and recommended upgrading the yellow card to a red card for serious foul play.”

The red card makes Aubameyang the third Arsenal player to score and be sent off in the same Premier League match.

Mikel Arteta was the last player to go from hero to zero for Arsenal in a clash against Palace at Selhurst Park in 2013.

Aubameyang bagged his 14th goal of the season when he slotted the opener past Vicente Guaita in the 12th minute.

But the Eagles hit back in the second half when Jordan Ayew’s deflected strike earned Roy Hodgson’s men a point at home.

The post Premier League: Why Aubameyang was sent off appeared first on Sporting Life.