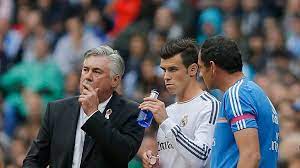 Gareth Bale is contracted to Real Madrid until the summer of 2022 but has come close to leaving permanently on numerous occasions; he was out of favour under Zinedine Zidane and struggled for consistency at Tottenham this season; Carlo Ancelotti has re-joined Real after leaving Everton

Bale spent the 2020/21 campaign on-loan at Tottenham where he struggled for match fitness and first-team minutes under former Spurs boss Jose Mourinho, but the Wales international finished the season in good form, scoring a hat-trick against Sheffield United and two goals against Leicester City.

The 31-year-old, who is set to enter the final 12 months of his contract at the Bernabeu, has said he will reveal what his future plans are following Wales’ involvement in the European Championships. In March, he dismissed any talk of retiring after the tournament.

Ancelotti and Bale won the Champions League and Copa del Rey together in 2014 and the Welshman scored in the finals of both competitions.

The Italian insists he remains a huge admirer of Bale and thinks he can still have an impact for Real, despite being frozen out by Ancelotti’s predecessor Zinedine Zidane.

Ancelotti left Everton on Tuesday after 18 months at Goodison Park to return to Real Madrid for a second spell in charge after having coached the Spanish giants between 2013 and 2015.

Man Utd ‘fear Rashford will miss start of next season