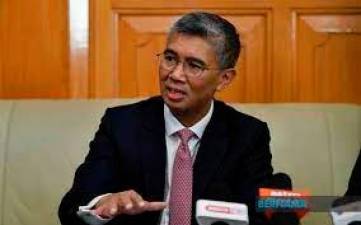 KUALA LUMPUR: The government has approved 7,387 applications for financing totalling RM1.38 billion under the Penjana Small and Medium Enterprise (SME) Financing programme as of April 9, 2021.

During the period, he said, 322,177 employers and 2.64 million employees have benefited from the Wage Subsidy Programme (PSU) 1.0 under the Prihatin Rakyat Economic Stimulus Package (Prihatin) and Penjana.

For PSU 2.0, he said, a total of RM1.14 billion had been channelled to 73,210 employers as of April 9 under the Prihatin Supplementary Initiative Package (Kita Prihatin) to enable them to continue operating and retain 631,801 employees.

“As for the Reskilling and Upskilling Programmes, a total of 132,403 participants have successfully gained employment through the programme.

“Key industries and sectors that were hiring include the manufacturing sector as well as wholesale and retail trade,“ he said.

Meanwhile, to support technical and digital adoption by SMEs and mid-tier companies, Tengku Zafrul said, a total of RM62.5 million had been channelled to 13,859 businesses in the form of grants and loans for subscription to digitalisation services as of April 9.

As for other initiatives such as the Frontliners Allowance, a total of RM651.15 million had been channelled based on 1.84 million claims from doctors, nurses and other medical personnel directly involved in managing and curbing the COVID-19 pandemic.

This special allowance was also extended to the military personnel, police, customs, immigration, firefighters, members of the Civil Defence Force and the People’s Volunteer Corps members who are directly involved in implementing the Movement Control Order (MCO).

“I would like to emphasise that the government will continue to focus on Malaysia’s economic recovery.

“For this year, the people and the business sector will continue to be supported under the Budget 2021 to ensure economic recovery,“ said Tengku Zafrul.

Additionally, to help the people and businesses during MCO 2.0 and the severe flood situation, the government had also launched the RM15 billion Malaysian Economic and Rakyat’s Protection Assistance Package in January. – Bernama

Appointment of 7 women as ministers is poor under Buhari-led administration, says Mbamalu

TNB’s Nenggiri dam in Kelantan to have multifold roles