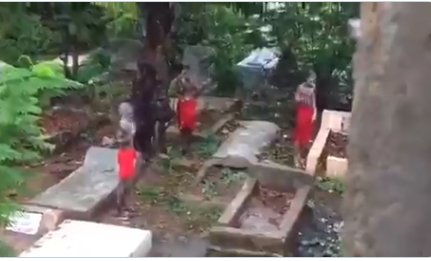 A shocking video has emerged online of three young men suspected to be “Yahoo boys” bathing at a cemetery while tying red clothing around their waists.  The footage was captured by a stunned individual who appeared to be filming the whole episode from an uncompleted building.  In the viral video, one of the men is seen at one point chanting incantations into a grave, as the two others continue to have their bath. Once done, the trio were seen dropping their soap on a grave before they all ran out of the cemetery by jumping a fence.  It’s unclear where the video was captured but many online believe the young men are internet fraudsters who want to defraud their clients through fetish means.  Watch the video below.       View this post on Instagram           A post shared by Lindaikejiblog (@lindaikejiblogofficial)      The post Shocking video of three suspected “Yahoo boys” caught bathing at a cemetery appeared first on Linda Ikeji Blog.

There is a lot to tell the Pope if you take your luck too...