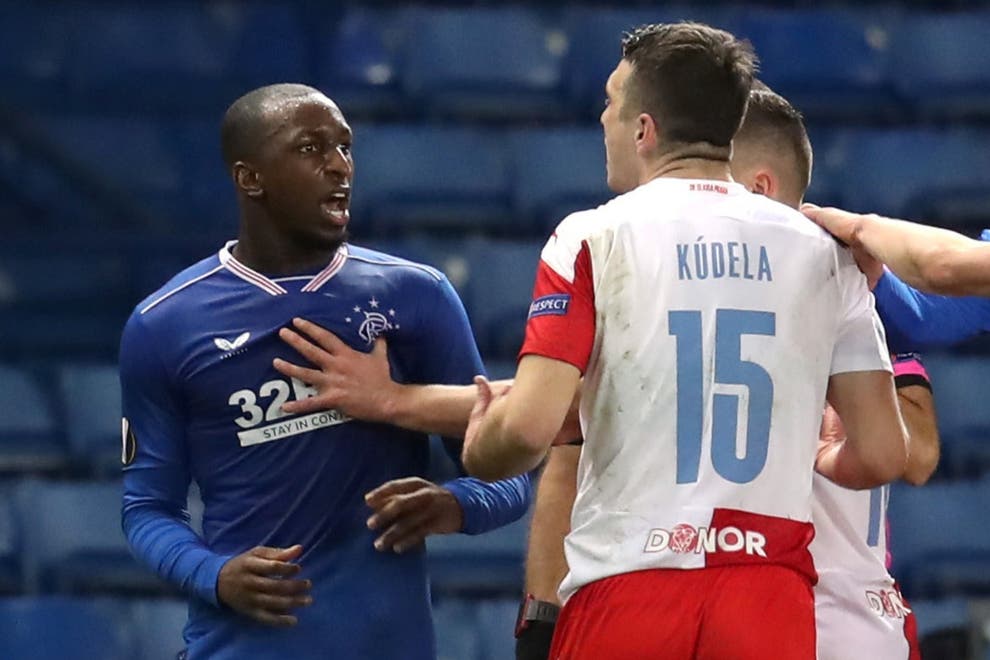 Slavia Prague defender Ondrej Kudela has been banned for 10 games by Uefa for racist behaviour during his side’s Europa League win over Rangers last month.

Kudela has been found guilty of racially abusing Rangers midfielder Glen Kamara – who himself has been hit with a three-game suspension for assaulting another player.

The defender will now miss Thursday’s second leg in Prague, with Slavia leading the tie on away goals after drawing the first leg at Emirates Stadium 1-1.

In a statement released on Wednesday, Uefa said: “Following an investigation conducted by a UEFA Ethics and Disciplinary Inspector regarding the incidents that occurred during the 2020/21 UEFA Europa League Round of 16 second leg match between Rangers FC and SK Slavia Praha on 18 March 2021, and the subsequent proceedings opened against Mr. Ondřej Kúdela and Mr. Glen Kamara, the UEFA Control, Ethics and Disciplinary Body has taken the following decisions:

UEFA handing Ondrej Kudela a 10-match ban after he whispered racist abuse into the ear of Glen Kamara is wildly insufficient.

Players can wear ‘respect’ on their arms, but without zero tolerance of racist abuse, it stands as an empty gesture. pic.twitter.com/3IQt0GVaEy

“To suspend SK Slavia Praha player, Mr. Ondřej Kúdela, for the next ten (10) UEFA club and representative team competition matches for which he would otherwise be eligible to play, for racist behaviour, which includes the one-match provisional suspension served by the player during SK Slavia Praha’s 2020/21 UEFA Europa League quarter-final first leg match against Arsenal FC on 8 April 2021.

“To suspend Rangers FC player, Mr. Glen Kamara, for three (3) UEFA club competition matches for which he would otherwise be eligible to play, for assaulting another player.”

The World’s Fastest Man Won’t Be at the Olympics

Kalu Won’t Be Rushed Back From Injury- Bordeaux Boss Gasset