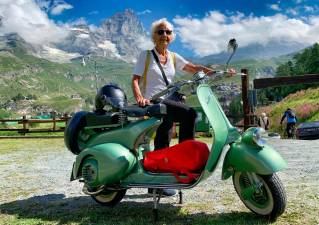 EVER since Audrey Hepburn took control of her Vespa in the 1953 classic “Roman Holiday”, the Italian scooter has been a symbol of joy and style and on its 75-year-old birthday, many Italians remain fondly attached to theirs.

“I wanted a more original two-wheeler than the Japanese scooters, plus it’s made of metal and not plastic, it’s much more resistant,” he told AFP.

While it is mostly a practical mode of transportation for him, he laments that for many “it’s a status symbol — in my neighbourhood all the successful people have a Vespa.”

Hepburn and Gregory Peck’s adventures in Rome made the Vespa famous in the 1950s, but its history dates back to April 23, 1946, when the first patent for its manufacture was registered in Italy.

Legend has it that the name – which means “wasp” in Italian – came from Enrico Piaggio, founder of the eponymous motor company, who compared the noise of its engine to the insect’s buzz.

Seventy-five years and 19 million units later, Vespas have lost none of their charm, despite the problems of driving them in Rome, with their small wheels unsuited to potholes and slippery cobblestones.

“These are 19 million stories of guys and girls, entire generations who dreamed of and gained their freedom astride a Vespa,” enthused a statement from Piaggio marking Friday’s anniversary.

Since 1946, the Vespa has been made at Pontedera, in Tuscany, although in recent years also in a factory in India and another in Vietnam. – ETX Studio

Reps ask Buhari to declare state of emergency over insecurity