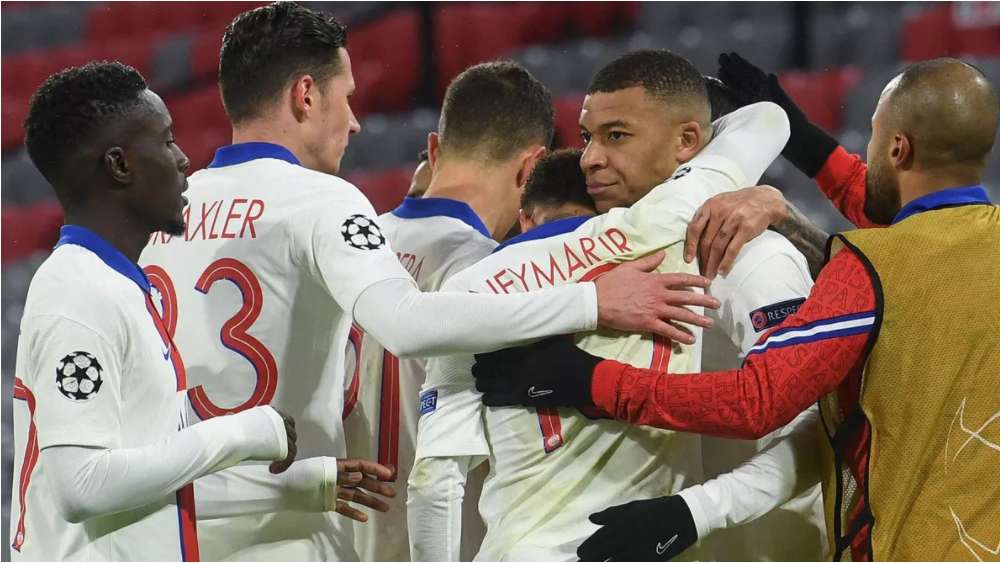 The sensational Kylian Mbappe scored twice as Paris Saint-Germain edged an exhilarating quarter-final first-leg clash against Bayern 3-2 in Munich to leave the holders staring at a Champions League exit.

In a breathless first half, PSG had two shots compared to Bayern’s 15 but, most importantly, both attempts found the net as Mbappe opened the scoring after just 149 seconds, before Marquinhos made it two just before the half-hour mark. Both goals were brilliantly set up by Neymar.

8 – Kylian Mbappé has scored eight goals in this season’s UEFA Champions League, the joint-most by a French player in a single campaign in the competition, moving level with Wissam Ben Yedder in 2017-18 and David Trezeguet in 2001-02. Magic. pic.twitter.com/R1daYgf0rc

It’s all over in Munich as @PSG_English win the first-leg!

Former Stoke and PSG hitman Eric Maxim Choupo-Moting – standing in for the injured Robert Lewandowski – headed his side back into it eight minutes before the break, before Muller completed the comeback to level things up on the hour mark.

But PSG’s superstar striker had the final say, as he raced clear on the counter to score a superb winner in the 68th minute, his eighth Champions League goal of a stellar season to raise his stock yet further and put his side in the driving seat to reach the last four and inflict just a second defeat in 29 Champions League games on Bayern.

In heavy April snowfall in Munich, it was clear from the off this was going to be an enthralling contest as Bayern were carved open by Neymar early on, with Mbappe taking his Champions League tally to 26 as he squeezed a strike under Manuel Neuer.
It was the earliest goal Bayern have conceded in the knockout stages of the Champions League since Wayne Rooney scored after 63 seconds in March 2010.
Bayern continued to test Keylor Navas down the other end, but they could not find a way past the PSG stopper, and their wastefulness in front of goal was punished as Neymar picked another sublime pass out, this time into the path of Marquinhos, who slotted home a rare goal to put PSG in command.

Beaten at home. We’ll need a big performance in Paris.

Read Also: BREAKING: Mount, Chilwell give Chelsea UCL first-leg win over Porto
Choupo-Moting’s fine header from a Joshua Kimmich cross meant you could not pause for breath. It was all happening in the first half, with three substitutions taking place before the break. Chaos all around.
In the second half, Bayern stepped it up a gear, and got themselves have on level terms through Muller’s second Champions League goal of the season – another header from a set piece – but their brittle backline could not cope with Mauricio Pochettino’s side, as the Argentian’s biggest win since taking charge was sealed by a finish worthy of winning every game, from a player who seems to revel on the grandest of stages.

Japan to add Tokyo, other areas to Covid-19 ‘quasi-emergency’ state

Fellaini prepares to return to England from China