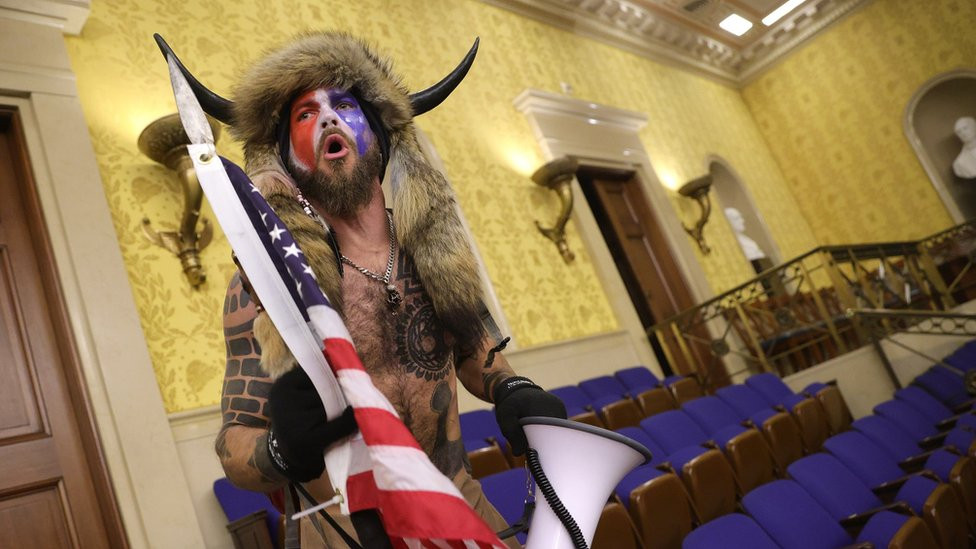 Jacob Anthony Chansley a.k.a. Jake Angeli, the shirtless man donning horns and carrying a US Flag on a spear has been arrested after participating in the riots at the US Capitol building in D.C. on Wednesday January 6.  The suspect who stood out from the crowd as the Pro-Trump supporters stormed the Capitol building, is a 32-year-old Arizona native and he has been charged with two federal counts of knowingly entering or remaining in any restricted building or grounds without lawful authority, and with violent entry and disorderly conduct on Capitol grounds.  The purported QAnon conspiracy theorist sometimes referred to as the “QAnon Shaman” according to the Arizona Republic, was taken into custody Saturday morning in Phoenix. He’s expected to have an initial appearance in federal court this week in Phoenix, a Justice spokesperson told The Arizona Republic. In a statement of facts, filed to secure an arrest warrant for Angeli, a Capitol Police special agent said he was able to identify Angeli through his “unique attire and extensive tattoos covering his arms and left side of his torso. 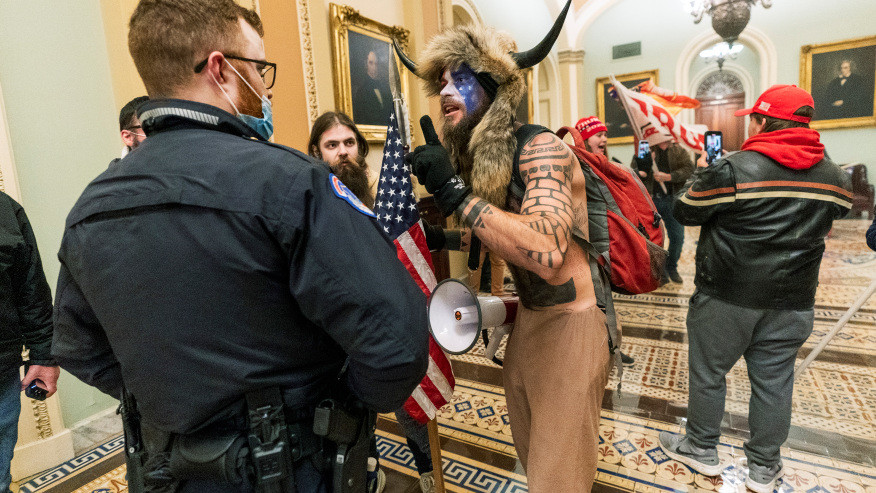 Angeli, according to the statement of facts, called the FBI on his own Thursday and confirmed he was the person who briefly was at the dais of the U.S. Senate. He told the FBI that he came to D.C. “as part of a group effort, with other ‘patriots’ from Arizona, at the request of the President that all ‘patriots’ come to D.C. on January 6, 2021″.  In the past year, Angeli has been spotted — often in costume — at various demonstrations across the country, including a Washington D.C. protest after Joe Biden’s presidential win in November. The Arizona native has also been photographed multiple times at the Arizona State Capitol — and in one instance, during a pro-Trump rally in February, held a sign that read, “Q Sent Me”  Though he identified himself publicly as Angeli, court records show he petitioned to have his name legally changed to Jacob Anthony Angeli Chansley in 2005. The post US Capitol riot: Shirtless man in face paint and horn arrested appeared first on Linda Ikeji Blog.

EndSARS: Drama at Ogun State Panel of Inquiry as police sergeant prostrates and begs for mercy after threatening a member

Trump revokes ethics ban on aides as he exits Washington

Aluko makes case for Lampard as fans vote for Rodgers

Sections of Washington DC to be closed ahead of inauguration due...